The incredible speeds in racing can mean that a slight touch with another car or straying off-line can send you flying through the air.
It is a real concern in racing when an unforeseen event can mean aerodynamics are suddenly not working in your favour. Turning downforce into lift and sending race cars tumbling through the air.
So how do these huge crashes happen? And what factors are being put in place to ensure these incidents don’t happen again?
➤ Subscribe for more incredible motorsport: goo.gl/AbD2f9
➤Follow us on:
➤ Instagram- @official_driver61 - bit.ly/D61Insta
➤TikTok - @official_driver61 - bit.ly/D61TikTok
We’ve seen so many of these incidents across F1, Sports Car Racing and Nascar - as well as every category in between.
Race cars take a lot of careful design to keep them on the track, but sometimes this can go wrong.
Let’s break down the three main reasons cars can get airborne - Angle of Attack, Airfoil Effect and Mechanical Advantage as well as how governing bodies are implementing technology to stop this happening.

The first effect is Angle of Attack, and the best example of this is one of the most famous racing incidents in recent memory. Mark Webber and Peter Dumbreck in the Mercedes SLR at Le Mans.
The Mercedes had a strange aerodynamic flaw that meant it took off three times that weekend, twice in the hands of Mark Webber in practice and once during the race with Peter Dumbreck at the wheel.
The Mercedes SLR was designed almost entirely to be fast at Le Mans, the long straights demand a very slippery car, but also enough downforce for the fast corners and tight chicanes.
This meant the designers created as much under-body downforce as possible, as this is a much more efficient way of creating downforce.
They made the car as long as the rules allowed and used a very short wheelbase. This gave the car very large overhangs and made the front and rear diffusers very large and made them the car’s main downforce producers.
Mercedes also ran a very low-rake for Le Mans, which made the car slippery but aerodynamically unstable.
Race cars normally run negative rake, angling the rear of the car upwards. They do this so that the body of the car acts as a sort of wing - creating downforce.
High-rake also creates and expanding tunnel under the car, which expands the air and creates downforce.
Mercedes ran a low rake for a low-downforce, low-drag setup. Where cars normally run between 1.5 and 3º of rake, Mercedes ran 0.7º.
This flat angle, large overhangs and low over-body downforce proved a lethal combination.
Mark Webber was running at 180mph towards Indianapolis corner and took the slight crest in the road. The high-speed air hit the bottom of the front diffuser, essentially eradicating the downforce it was producing.
This high-pressure air pushed the nose of the car in the air and suddenly removed all of the under-body downforce - sending Mark Webber flying through the air.
The same thing has happened a number of times, twice more that weekend as well as the Porsche 911 GT1 at Road Atlanta.
To stop this, there have been a number of rule changes brought in by the FIA. They tightened up how large the overhangs can be, limiting the underbody downforce that can be created.
This is also the reason for the wheel arch cutouts you see on Prototype Sports Cars. If these cars were put int the same position as the Mercedes, they allow an escape for the high-pressure air under the car. Meaning the nose can drop back down and stop the car flipping. 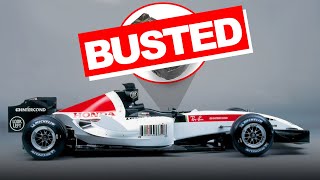 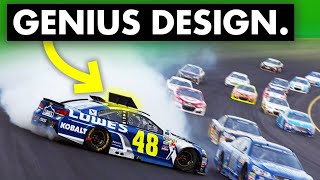 The Simple Invention That Saved NASCAR 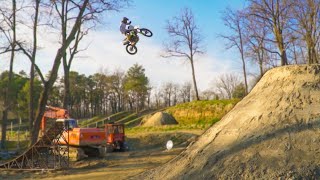 Why Race Cars Don’t Have Airbags